The She-Wolf of France by Maurice Druon 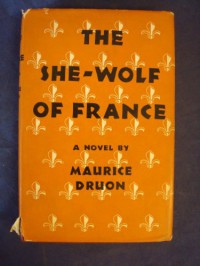 Description: "This is the original Game of Thrones.” George R.R. Martin.

Charles IV is now king of France and his sister is Edward II of England’s Queen. Having been imprisoned by Edward as leader of the rebellious English barons, Roger Mortimer escapes to France, where he joins the war against the English Aquitaine. But it is his love affair with Isabella, the ‘She-Wolf of France’, who has come seemingly to negotiate a treaty of peace that seals his fate…