The Pirates! In an Adventure with Ahab 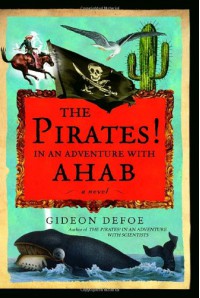 ** spoiler alert ** dedication: To Sophie, who still has a quarter of a million pounds of which I have not seen a penny, even though this is the second entire book that I have dedicated to her

Opening: 'That one looks almost exactly like a whale!'

Again - lovely-jubbly maps and interesting factual footnotes such as #7 - The cement exuded by barnacles is an extremely tough protein polymer. It is twice as strong as the epoxy glue used on the space shuttle. Also, the barnacle penis is ten times as long as the rest of its body.

On page six the cap'n is making a list of when it is acceptable for a pirate to cry:

If you like Pterry-like humour, and like the idea of a send-up of ol' Ahab this will suit you just fine. The lads here are arguing over who will read this next.