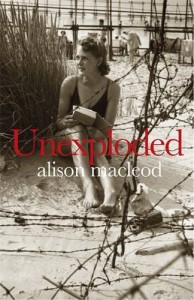 Description: A tale of love, art and prejudice set in wartime Brighton.

"Fear was an infection - airborne, seaborne - rolling in off the Channel, and although no one spoke of it, no one was immune to it. Fifty miles of water was a slim moat to an enemy that had taken five countries in two months, and Brighton, regrettably, had for centuries been hailed as an excellent place to land."

In May 1940, Geoffrey and Evelyn Beaumont and their Philip, anxiously await news of invasion on the beaches of Brighton. Geoffrey, a banker, becomes Superintendent of the internment camp on the edge of town while Evelyn is gripped first by fear and then quiet but growing desperation.

A discovery widens a fault-line in family life.

Alison MacLeod lives in Brighton. She was shortlisted for the BBC National Short Story Award in 2011 and her story 'Solo, A Capella', about the Tottenham riots, featured in the Radio 4 series 'Where Were You ...' in 2012. Her previous works include The Changeling and The Wave Theory of Angels. Unexploded was long-listed for the Man Booker Prize in 2013. Alison is Professor of Contemporary Fiction at the University of Chichester.

Episode 1: With Brighton braced for an imminent invasion on its beaches, Geoffrey comes home with some shattering news.

Episode 2: After a difficult evening and a restless night, Geoffrey wakes up hoping to reconcile with Evelyn.

Episode 3: Who is the other patient - hidden behind a screen - in the internment camp infirmary?

Episode 5: The Beaumonts are set on ever-diverging paths. Geoffrey has begun to see Leah, while Evelyn - against his wishes - has decided to visit the internment camp.

Episode 6: Evelyn has become interested in the fate of internee Otto Gottlieb. But according to Geoffrey, there's more to Otto than meets the eye.

Episode 7: Things come to a head between Geoffrey and Evelyn. And Orson's brother Hal comes home 'on leave'.

Episode 8: Otto has started work on a fresco in a local church. The internment camp has closed, but Geoffrey now has observer duties with the UXB unit

Episode 9: Stung by Otto's off-handedness, Evelyn has thrown herself into her work with the WI and at home. But can it last?

Episode 10: Evelyn is not at home. Prompted by Philip's anxiety and suspicions, Geoffrey has gone looking for her. And why is there smoke coming from No. 5?

Well this is a book of two halves. Totally limp-wristed inertia, then, too late for the bailers I'm afraid, this gets an edge that becomes quite compelling.

I did rather dry retch at the Woolf moment though - that was a '(name)drop' too far, and sort of out of context, no? Kind of an inauthentic plot developer