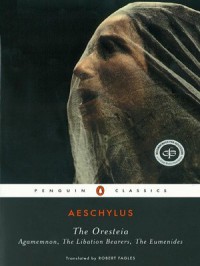 The second part of Aeschylus's Oresteia trilogy in a new version by Ed Hime.

BBC blurb: The second play in Aeschylus's classic trilogy about murder, revenge and justice. Agamemnon's son Orestes returns home from exile to kill his mother in revenge for his father's murder. But where can he find the strength to carry out such a terrible deed?

"People, look upon this mess of flesh."