The Death of a Beekeeper 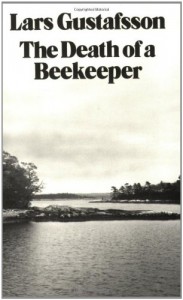 Read from November 28 to 30, 2013
Translated by Janet K Swaffar and Guntram H Weber


"Dogs! Hangmen's servants!
Royal torture masters
Haven't you understood?
You there, heating tongs over a coal fire!
I'm actually a donkey!
With the heart of a donkey and the bray of a donkey!
I never give up!"

Opening: Kind readers. Strange readers. We begin again. We never give up. It is early spring 1975, the story begins in the middle of a thaw. The location is North Västermanland.

Well I have them mixed up when it comes to taste according to the reviews on grrrrramazon. Much preferred The Tiler's Afternoon, a bleak tale told wry. This Death of a BeeKeeper was a hotchpotch of homilies and poor man's philosophy, random thoughts and conjured up notebook snatches. A couple of ideals made me stop and think them through but overall, notsomuch.