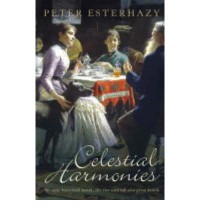 Under the intecession is my first stab at this book. Will re-read the the first 171 pages and from thereon in it is virgin soil.

A fair dobber of a book, withdrawn from Bournemouth Libraries. Translated by Judith Sollosy. A note about the author The renowned contemporary Hungarian writer Péter Esterházy is the grandson of count Móric Esterházy (1881–1960), prime minister of Hungary and one of the five biggest landowners of Hungary. After the regime change in 1989, Péter Esterházy refused to accept the return of any land or valuables nationalised by the communists.

It is deucedly difficult to tell a lie when you don't know the truth.

There, the tone is set now how about the style? A few pages in and I can tell you this is, erm, *thinks hard* ... 'undulating' will suffice for the moment.

The House of Esterházy (also spelt Eszterházy) was a Hungarian noble family at the beginning of the Middle Ages. From the 17th century they were among the great landowner magnates of the Kingdom of Hungary, during the time it was part of the Habsburg Empire and later Austria-Hungary.