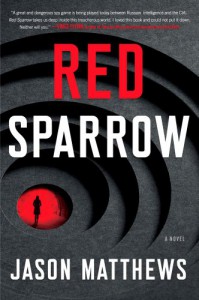 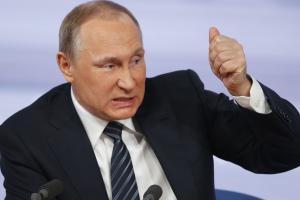 ... and Trump is great, Blatter should get the Nobel, so what if we lied about being in Ukraine and such a shame that black box was broken but the economy is doing well...

Description: In today’s Russia, dominated by Prime Minister Vladimir Putin, state intelligence officer Dominika Egorova struggles to survive in the cast-iron bureaucracy of post-Soviet intelligence. Drafted against her will to become a “Sparrow,” a trained seductress in the service, Dominika is assigned to operate against Nathaniel Nash, a first-tour CIA officer who handles the CIA’s most sensitive penetration of Russian intelligence. The two young intelligence officers, trained in their respective spy schools, collide in a charged atmosphere of tradecraft, deception, and inevitably, a forbidden spiral of carnal attraction that threatens their careers and the security of America’s valuable mole in Moscow. Seeking revenge against her soulless masters, Dominika begins a fatal double life, recruited by the CIA to ferret out a high-level traitor in Washington; hunt down a Russian illegal buried deep in the U.S. military and, against all odds, to return to Moscow as the new-generation penetration of Putin’s intelligence service. Dominika and Nathaniel’s impossible love affair and twisted spy game come to a deadly conclusion in the shocking climax of this electrifying, up-to-the minute spy thriller.

Opening: Twelve hours into his SDR Nathaniel Nash was numb from the waist down. His feet and legs were wooden on the cobblestones of the Moscow side street. It had long since gotten dark as Nate ran the surveillance detection route designed to tickle the belly hairs of surveillance, to stretch them, to get them excited enough to show themselves. There was nothing, not a hint of units swirling, leapfrogging, banging around corners on the streets behind him, no reaction to his moves. Was he black? Or was he being had by a massive team? In the nature of The Game, not seeing coverage felt worse than confirming you were covered in ticks.

Brutally deprived of her calling as ballerina with the Bolshoi, Dominika's uncle Vanya steps in with a job offer that will ensure her mother can keep her apartment after the sudden death of her husband.

A bunch of folk didn't appreciate the recipes, where I did, very much for the first third or so, and as I tap away here my Beet Soup is bubbling away in the pot in the kitchen and smells delicious. My pet peeve #1 was the aura thing, it really grated, and turned the mainly credible story into gimmick. #2 - too long, and if all the recipes and food descriptions were removed it would amount to circa 200 pages.

This is not literature but it is good story-telling by one who knows his spy trade and I can't accuse Matthews of making me loathe Putin and his cronies, I was already there.

When will Mr and Mrs Average Russia get a break - through the centuries it has been consistently terrible for them.

MOSCOW
MARBLE: in his sixties, major general in the SVR, which was the successor to the KGB’s First Chief Directorate, the Russian Foreign Intelligence Service, the Kremlin’s overseas spies. MARBLE had been in harness for fourteen years.
Trunk

OLD LADY’S BEET SOUP:
Melt butter in a large pot; add a chopped onion and sauté until translucent; stir in three grated beets and one chopped tomato. Pour in beef stock, vinegar, sugar, salt, and pepper. Broth should be tart and sweet. Bring to a boil, then simmer for an hour. Serve hot with a dollop of sour cream and chopped dill.

MOSCOW AIRPORT CUBAN SANDWICH:
Slice a twelve-inch loaf of Cuban bread partway through lengthwise and fold flat. Drizzle olive oil on outside and slather yellow mustard inside. Layer glazed ham, roast pork, Swiss cheese, and thinly sliced pickles. Close and press for ten minutes in a plancha or between two hot foil-wrapped bricks (heat bricks for an hour in a 500-degree oven). Cut in thirds on the diagonal.

BLINIS SERVED AT VASSILY EGOROV’S WAKE:
Season one cup flour with baking powder and kosher salt. Add milk, egg, and clarified butter, and blend into a smooth batter. Cook a tablespoon of the batter at a time over medium low heat until blini are golden on both sides. Serve topped with red caviar, salmon, crème fraîche, sour cream, and fresh dill.

SPANISH EMBASSY TORTILLA ESPAÑOLA
Cook seasoned, medium-sliced potatoes and chopped onions in abundant olive oil until soft, then remove and drain. Add beaten eggs to potatoes and onions and return to oiled pan on medium heat until edges and bottom start to brown. Place plate over skillet, invert, then slide tortilla back into pan and cook until golden brown.

NATE’S VEAL PICATTA
Pound small medallions of veal paper-thin. Season and quickly sauté in butter and oil until golden. Remove and cover. Deglaze pan with dry white wine and lemon juice, boil to reduce. Lower heat, add thin lemon slices, capers, and cold butter. Gently simmer to a thick reduction (do not bring back to a boil). Return medallions to sauce to warm.

MARTA’S LAST MEAL—PYTT I PANNA
In foaming butter, separately and aggressively brown cubed beef, potatoes, and diced onions until crisp. Incorporate ingredients in the skillet with additional butter, season and reheat. Form a well in the mixture, and break a raw egg into it. Stir the egg into the hash before serving.