A Death in the Family by Karl Ove Knausgård 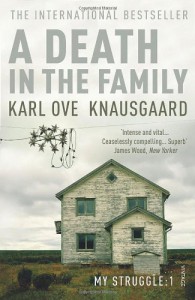 Norway's National Theatre has postponed its production of Karl Ove Knausgård's novel My Struggle until next year, after the theatre's director, Hanne Tømta, decided it needed more time.

Opening: FOR THE HEART; LIFE IS SIMPLE: it beats for as long as it can. Then it stops. Sooner or later, one day, this pounding action will cease of its own accord, and the blood will begin to run towards the body's lowest point, where it will collect in a small pool, visible from the outside as a dark, soft patch on even whiter skin, as the temperature sinks, the limbs stiffen and the intestines drain.

This is a ramble, a sad ramble. A lengthy meander through a fictionalised slice of the author's young life. It is belly-button mining in a big way, and that parallel with Proust we all hear about? It was posited by Knausgård himself right at the beginning. I enjoyed this as a dip in, dip out read however I won't continue with the series unless it drops in my lap.