The High Divide by Lin Enger 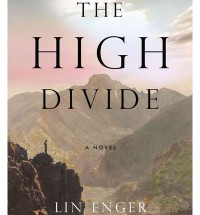 Description: In 1886, Gretta Pope wakes one morning to discover that her husband is gone. Ulysses Pope has left his family behind on the far edge of Minnesota’s western prairie, with only the briefest of notes and no explanation for why he left or where he’s headed. It doesn’t take long for Gretta’s young sons, Eli and Danny, to set off after him, following the scant clues they can find, jumping trains to get where they need to go, and ending up in the rugged badlands of Montana.

Short on money and beleaguered by a treacherous landlord, Gretta has no choice but to seek out her sons and her husband as well, leading her to the doorstep of a woman who seems intent on making Ulysses her own. While out in the Western wilderness, the boys find that the closer they come to Ulysses’ trail, the greater the perils that confront them--until each is faced with a choice about whom they will defend, and who they become.

Enger’s breathtaking portrait of the vast plains landscape is matched by the rich expanse of his characters’ emotional terrain, as pivotal historical events--the bloody turmoil of expansionism, the near total demise of the bison herds, and the subjugation of the Plains Indians--blend seamlessly with the intimate story of a family’s sacrifice and devotion.

Opening: That summer was cool and windless, the clouds unrelenting, as if God had reached out his hand one day and nudged the sun from its rightful place.

Danny with his recurrent, and perhaps prophetic migraines, comes under the wing of elder brother Eli, who has stepped into a pair of daddy shoes since Ulysses, said Daddy, did a bunk ostensibly to go earn some big bucks somewhere out there, in wide blue yonder. His whereabouts are unknown and the small town gossips are hinting that he has run away from his debts and duties to be with another woman. Then there is Mr Fogerty who seems to have taken quite a shine to Greta, offering her board, lodgings and a little salary if she and her two sons would move in with him.

Right from the get-go it was easy to intuit that this was going to be a 'nice' story, and although there would be struggles, everything would be tied up in neat little Happy Ever After Bows. It was this lack of edge, and son Eli's thoughts too old for his age, that loses gravitas for me, although I can envisage this as being a highly popular, as it is a charming, clean story about how family members never really know each other.

Set right in the heart of the Rockies, as The High Divide region straddles the heights along the Centennial Mountains and includes the Madison and Jefferson rivers.