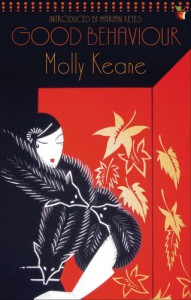 Recommended for: BBC Radio Listeners
Read from February 06 to 08, 2014

BBC description: Behind the gates of Temple Alice, the aristocratic Anglo-Irish St Charles family sinks into a state of decaying grace. To Aroon St Charles, the large and unlovely daughter of the house, the fierce forces of sex, money, jealousy, and love seem locked out by the ritual patterns of good behavior. But crumbling codes of conduct cannot hope to save the members of the St Charles family from their own unruly and inadmissible desires. This elegant and allusive novel, which was shortlisted for the Booker Prize, established Molly Keane as the natural successor to Jean Rhys.

I warmed up nicely to the storyline and especially liked the way things were by the end. Lovely, loved, Aroon!