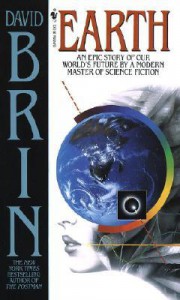 Read from December 18, 2013 to January 11, 2014
Description: Set in the year 2038, the book is a cautionary tale of the harm humans can cause their planet via disregard for the environment and reckless scientific experiments. The book has a large cast of characters and Brin uses them to address a number of environmental issues including endangered species, global warming, refugees from ecological disasters, ecoterrorism, and the social effects of overpopulation. The plot of the book involves an artificially created black hole which has been lost in the Earth's interior and the attempts to recover it before it destroys the planet. The events and revelations which follow reshape humanity and its future in the universe.

A formerly restrained singularity has broken loose and is comfortably nestled in the earth's core EATING THE PLANET FROM THE INSIDE OUT. nom nom nom. Brings new meaning to Hitler's beloved Hollow Earth Theory:

@25% point: A BIG read/listen that has me in its grips. Not a regular customer of sci-fi yet once into an epic such as this, I'm away.

@100% Scary storyline; it's dystopian sci-fi so I expected to be disconcerted, however events caught my horror bone in a vice. Loses a star because Brin's characters didn't jump out off the page and into believable people.