The Portable Atheist: Essential Readings for the Nonbeliever 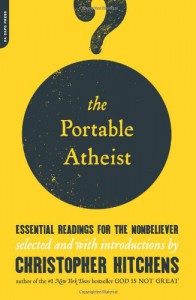 anthology of atheist writing through the ages.


“Isn't it enough to see that a garden is beautiful without having to believe that there are fairies at the bottom of it too?”

― Douglas Adams, The Hitchhiker's Guide to the Galaxy

Russell's essay was the longest and the most engossing, however for beauty, it was hard to beat Kayyam's advocation of love over belief. To be kept for a re-visit at some point.

Please could the next person to wade through these essays leave a note for me about which Pope who was solicited for help by RSPCA and had it turned down because animals don't have souls. I don't think a name was mentioned. If this was published 2007 then that would make it Benedict XVI but as Themis-Athena points out, Benedict had a dog at one stage. Thanks.