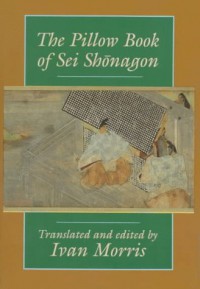 BBC blurb - Lady Shonagon and Lieutenant Yukinari return to investigate a murder in the Palace of the Sun Goddess. A favourite of the Emperor is found drowned in a pool in the Palace Gardens. But before Yukinari can investigate, the body is given a ceremonial burial and all trace of the crime washed away by the spring rains.

From wiki - The Pillow Book (枕草子 Makura no Sōshi?) is a book of observations and musings recorded by Sei Shōnagon during her time as court lady to Empress Consort Teishi (定子) during the 990s and early 11th century in Heian Japan. The book was completed in the year 1002.

In it she included lists of all kinds, personal thoughts, interesting events in court, poetry and some opinions on her contemporaries. While it is mostly a personal work, Shōnagon's writing and poetic skill makes it interesting as a work of literature, and it is valuable as a historical document. Part of it was revealed to the Court by accident during Shōnagon's life. The book was first translated into English in 1889 by T. Purcell and W. G. Aston. Other notable English translations were by Ivan Morris in 1967 and Meredith McKinney in 2006.