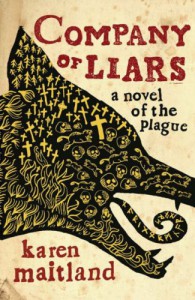 Recommended to ☯Bettie☯ by: vivienne
Read in May, 2008

An enjoyable and mildly supernatural romp through superstitious and pestilent times; some of those story lines were easy to see through but that didn't seem to matter too much as the customs and traditions of the times were enthralling to learn about. Five star goodness.

In this extraordinary novel, Karen Maitland delivers a dazzling reinterpretation of Chaucer's Canterbury Tales--an ingenious alchemy of history, mystery, and powerful human drama.
The year is 1348. The Black Plague grips the country. In a world ruled by faith and fear, nine desperate strangers, brought together by chance, attempt to outrun the certain death that is running inexorably toward them.
Each member of this motley company has a story to tell. From Camelot, the relic-seller who will become the group's leader, to Cygnus, the one-armed storyteller . . . from the strange, silent child called Narigorm to a painter and his pregnant wife, each has a secret. None is what they seem. And one among them conceals the darkest secret of all--propelling these liars to a destiny they never saw coming.