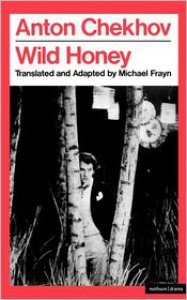 
From wiki - Wild Honey is a 1984 adaptation by British playwright Michael Frayn of an earlier play by Anton Chekhov. The original work, a sprawling five-hour drama from Chekhov's earliest years as a writer, has no title but it is usually known in English as Platonov, from its principal character "Mikhail Platonov", a disillusioned provincial schoolmaster.

Frayn's adaptation was given its first production at London's National Theatre in 1984 and won Olivier Awards in three categories: for Ian McKellen as Actor of the Year in a Revival, Christopher Morahan as Director of the Year and John Gunter as Designer of the Year. "Anna Petrovna" was played by Charlotte Cornwell.

The play opened at New York's Virginia Theatre in December 1986 presented by impresario Douglas Urbanski with McKellen repeating his title role, but otherwise with an American cast which included Kim Catrall, Kathryn Walker and Kate Burton.