A Taste For Death 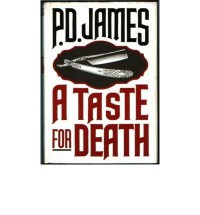 blurby blings - When two men are discovered with their throats cut in the vestry of St Matthew's Church, the police are faced with an intriguing challenge – one of the victims was ex-Government minister Sir Paul Berowne and the other Harry Mack, a local tramp and alcoholic.

For Commander Adam Dalgliesh, now heading a Scotland Yard unit set up to investigate politically sensitive crimes, the case is particularly affecting – he had known Berowne, and the minister had asked for his help regarding an anonymous letter, shortly before his resignation.

From The Radio Times: PD James's main strength is her sense of place and the opening scene of blood-soaked slayings in a church vestry is one of her finest. As usual, her sleuth Adam Dalgliesh seems to hover over proceedings without being fully formed: almost all we know of his character is that he's a respected poet. It's certainly hard to work out why, as one suspect explains, he's regarded "as the most dangerous detective in London". Good job then that the cast of vile nobility at the centre of this absorbing mystery make up for it with their deliciously ignoble acts.