The Crime of Olga Arbyelina by Andreï Makine 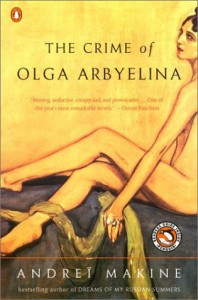 Description: A Russian princess, a refugee from the Bolsheviks, abandoned by a faithless husband, flees with her child to France, where she is subsequently found half-naked on a riverbank next to a body of a man with a terrible wound on his head.

Translated by Geoffrey Strachan who notes that Makine was born and brought up in Russia but this novel is written in French.

Opening: Those that come first lie in wait for his words like mere eavesdroppers. Those that follow seem to appreciate something more in them. And they can be easily identified: there are fewer of them than the merely inquisitive ones and they come alone. They dare to draw a little closer to the tall old man as he slowly patrols the labyrinth of avenues, and they leave later than the first comers.


This is a tale of Russian emigres in France. Dreamy prose delivered circumlocutionally, and in ever decreasing spirals backwards through time. One for lit lovers.