A Year in the Life of William Shakespeare: 1599 by James Shapiro 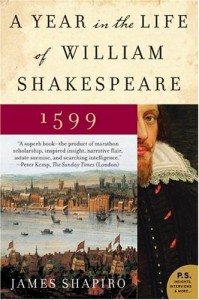 Recommended to Bettie☯ by: Susanna - Censored by GoodReads
Read from August 20, 2014 to February 09, 2016
Description: Shakespeare wrote four of his most famous plays: Henry the Fifth, Julius Caesar, As You Like It, and, most remarkably, Hamlet; Elizabethans sent off an army to crush an Irish rebellion, weathered an Armada threat from Spain, gambled on a fledgling East India Company, and waited to see who would succeed their aging and childless queen.

James Shapiro illuminates both Shakespeare’s staggering achievement and what Elizabethans experienced in the course of 1599, bringing together the news and the intrigue of the times with a wonderful evocation of how Shakespeare worked as an actor, businessman, and playwright. The result is an exceptionally immediate and gripping account of an inspiring moment in history.

Opening: The weather in London in December 1598 had been frigid, so cold that ten days before New Year's the Thames was nearly frozen over at London Bridge.

It was weird reading this, where the Irish 'problem' loomed large at the Elizabethan Court, and it being the 100 year anniversary of the Easter Uprising. What bastards the English were - truly, and I was amazed at Edmund Spenser: feel that I should go back and wipe that 5* off. Yet hey, that would be as stupid as taking Rhodes's statue down from Oxford - uncomfortable or not, these things did happen and we should not squirm in the light of past atrocities but make a better world by examining past mistakes.

WHOA - in a **ping** moment of self enlightenment I come across how being PC can help wipe guilt off a subject. That really musn't happen - let those bad decisions from the past stay and act as a warning.

The main themes in this book:
- bye-bye Will Kemp
- Essex and Ireland
- the Spanish question
- Globe building