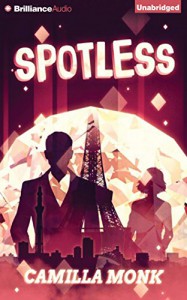 Description: Island Chaptal—nerdy IT engineer by day, romance novel junkie by night—just walked into her messy New York apartment to find Mr. Right waiting for her. No, wait…Mr. Clean.

A gentleman professional killer with a bad case of OCD and zero tolerance for unsorted laundry, March isn’t there to kill her…yet. He wants the diamond her late mother stole for a sinister criminal organization. Island agrees to help him find it, facing the kind of adversaries who dismember first and ask questions later. Good thing she’s got March to show her the ropes. And the guns. And the knives.

The buttoned-up Island is soon having a blast racing from Paris to Tokyo following the clues in her mother’s will, and for the first time, she’s ready to get close to someone. But falling for a hit man may be the very definition of loving dangerously. Spotless marks the beginning of Island and March’s ongoing adventures

Time for some fluff. All the chapter front quotes are fictional except Chapter 31: "Render unto Caesar.."

It is written in first person.