The Dunwich Horror by H.P. Lovecraft Opening: When a traveler in north central Massachusetts takes the wrong fork at the junction of the Aylesbury pike just beyond Dean's Corners he comes upon a lonely and curious country. The ground gets higher, and the brier-bordered stone walls press closer and closer against the ruts of the dusty, curving road. The trees of the frequent forest belts seem too large, and the wild weeds, brambles, and grasses attain a luxuriance not often found in settled regions. At the same time the planted fields appear singularly few and barren; while the sparsely scattered houses wear a surprizing uniform aspect of age, squalor, and dilapidation. Without knowing why, one hesitates to ask directions from the gnarled, solitary figures spied now and then on crumbling doorsteps or in the sloping, rock-strewn meadows. Those figures are so silent and furtive that one feels somehow confronted by forbidden things, with which it would be better to have nothing to do. When a rise in the road brings the mountains in view above the deep woods, the feeling of strange uneasiness is increased. The summits are too rounded and symmetrical to give a sense of comfort and naturalness, and sometimes the sky silhouettes with especial clearness the queer circles of tall stone pillars with which most of them are crowned. 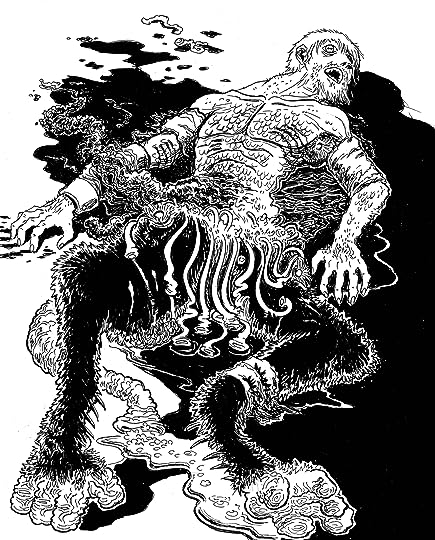 This was a scary one. Must make an effort to read more from the Welsh author Arthur Machen.