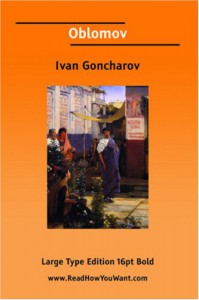 Opening: Ilya Ilyich Oblomov was lying in bed one morning in his flat in Gorokhovaya Street in one of those large houses which have as many inhabitants as a country town.

I'd like someone far cleverer than yours truly, to compare and contrast Léonie from Swann's Way with Oblomov. You know, just for fun!

Had this onhold for a over a year when most fortuitously, teh darlink beeb decided to throw it at us, gratis! I procrastinated just as Oblomov did, yet now I am sorted, and fun it was too for all that waiting.

From wiki: Oblomov is also the central character of the novel, often seen as the ultimate incarnation of the superfluous man, a symbolic character in 19th-century Russian literature

Description: Gentle, intelligent Oblomov completely fails to deal with life. He lives in a flat in St Petersburg. He is always about to go and sort out his estate but he rarely gets out of bed. Never doing today what he can put off till tomorrow Oblomov is a tragic-comic hero for a couch potato generation.