The Lost Honour of Katharina Blum: Or How Violence Develops and Where It Can Lead by Heinrich Böll, Leila Vennewitz (Translator) 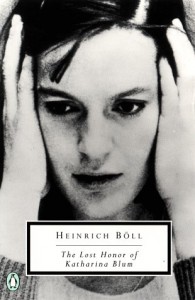 BBC blurb: A brilliant exploration of the corrosive impact of tabloid journalism on one young woman. The Lost Honour of Katharina Blum is dissects the power of the press and it's impact on individual freedom. Told in the form of an unofficial report, this intelligent and pacy story from the 1970s tackles issues of press freedom, responsibility and police tactics.

It's based on a real incident in the author's own life, when he was publicly accused of being a terrorist sympathiser and hounded by the German press. The subtitle of the book is "how violence develops and where it can lead."

Recorded on location in Berlin, The Lost Honour of Katharina Blum also features a soundtrack of 1970s Krautrock from bands such as Can, Neu, La Dusseldorf and Ash Ra Tempel.

Abridged by Helen Meller Produced and directed by Polly Thomas A Somethin' Else production for BBC Radio 4.

#2: Katharina's employers, Mr and Mrs Blorna, become involved and are agitated by the lurid tabloid headlines about her. She is taken back in for questioning.

#3: Katharina is the subject of ever more lurid tabloid headlines. Her family and friends are interrogated, and more is revealed about her upright moral character.

#4: The Blornas discover their high-ranking politician friend Alois Straubleder is in love with their housekeeper Katharina, even though she has refused his advances.

#5: The fugitive Ludwig is captured, and Katharina is proved innocent of any involvement with his crime. However, this doesn't deter the press, and their headlines grow ever more lurid.